One Love, One Family, One Ministry 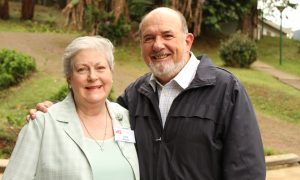 This year we reach the milestone of 60 years of ministry African Enterprise ministry on the continent of Africa, and not only in Africa, but many other parts of the world as also around the world as AE evangelists have travelled far and wide.

Those 60 years have seen an unparalleled change in society and technology.  The change is so great that the changes during the time of the AE ministry equate to all the changes since the time of Christ to the start of AE’s ministry. I recall the times when communications were so difficult and different.  Telephones were erratic (often due to the attraction of the copper wire in cables to thieves) to non-existent.  There was no such thing as the internet or mobile phones.  The fax machine which has now almost been phased out had yet to come in to use and computers were in their infancy and years off the era of the personal computer.

The one thing that has not changed and which was proclaimed then as it is proclaimed now was the great and wonderful fact that God loves us.  Despite all our feebleness and frailty, He loves us.  Indeed, he loves us so much that he was willing to send His son for us to pay the ultimate price on the cross on our behalf so that all who trust in Him should not suffer the consequences of their sin but instead, by adoption be brought into God’s family in the confidence that because Jesus broke the chains of death, we too who have surrendered our lives to Him have an eternal future with Him.

This is so simple and yet so profound and so powerful.  I have had the privilege of seeing people respond to this message across Africa and many other parts of the world. A couple of years before Covid began I was on mission in Southern India and had the joy of seeing many come forward.  Thankfully not because of any eloquence I might have had which I am sure was sadly lacking, but because of the simplicity of that message and the work of the Holy Spirit.

The great joy for me also as I look back on the 60 years is the inescapable fact that because of our adoption into God’s family we are consequently sisters and brothers in the same family.  We may have different backgrounds, come from different tribes, nations and cultures but we are one.  That I think is the great witness to the power of the gospel and the great witness of AE in its ministry.  It is why my late great colleague and friend Stephen Lungu could laugh and joke with each other and be comfortable in each other’s homes – because we were brothers.  In our days before we respectively surrendered our lives to Jesus, we would have been enemies.

This morning I was reading about Gideon (Judges 6-8) and his faithfulness and obedience to God as he reduced the number of men with him down to 300.  With those 300 he defeated the Midianite army.  Then sadly he later deviated by making a gold ephod that became an object of false worship by the Israelites.  It is a salutary reminder that we must ever be watchful in this changing world where even parts of the church have deviated from the truth, that we are ever called to be faithful and obedient to God.

1 John 5:1-5 reminds us that if we truly love God, we must be obedient to him and love each other.  That is what I hope and pray will continue to distinguish us as the AE ministry moves into the next generation.