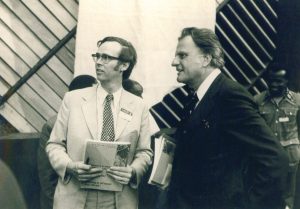 In March 1974, the historic South African Congress on Mission and Evangelism took place in Durban. This gathering, the first of its kind drew together 800 leaders from all races and from most denominations in the South African Church to confer together for 10 days. To this congress AE invited several East African leaders, most notably Dr John Gatu, a Presbyterian leader from Kenya, and also Rev John Mpaayei, General Secretary of the East African Bible Society.

These Brethren were so struck by what they saw in Durban and by its huge impact that they were ready for the suggestion from Michael of a Pan African Christian Leadership Assembly drawing Christian leaders from all the countries of Africa. The vision took hold and brought forth the Pan African Christian Leadership assembly in Nairobi in December 1976.  Again there were 800 delegates drawn from 49 out of Africa’s 51 Countries, and from every conceivable denomination. PACLA established a network of relationships across Africa which survives mainly in the next generation even to this day.

By a miracle of God’s grace some 70 delegates from South Africa secured visas at the very last moment to travel to Kenya for PACLA. In the time for national meetings, the South African group had tremendous internal struggles, having carried with them from South Africa all the problems convulsing the country at the time. But at PACLA some marvelous reconciliations took place and the newly united group of South African leaders returned to South Africa ready to be inspired by Professor David Bosch and Michael Cassidy for a South African counterpart to PACLA.

This finally came forth in 1979 with David Bosch as the Chairman and Michael as the Programme Chairman. Some 5000 delegates met in Pretoria and the revolutionary chemistry of encounter brought forth a transforming network of relationships which contributed significantly to the final ending of apartheid. A key in this was the person of Professor Johan Heyns, a Dutch Reformed leader who became moderator of the NGK (DRC) He was deeply challenged by PACLA and in many ways racially transformed. The PACLA experience led him to set up a commission in the NGK to establish whether apartheid could be biblically and theologically justified. The consequences were monumental.

At the General Synod of 1985 it was recognized and accepted that “Apartheid is a Sin and a Heresy.” Michael believes that this finally put the skids under the apartheid government more effectively than economic sanctions, cultural boycotts and sporting isolation. After PACLA Dr. Piet Koornhoff, then minister of Plural/ Bantu Affairs, who had in fact opposed PACLA, said “This is the Miracle South Africa needs.”