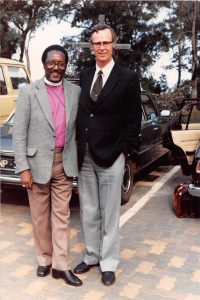 Festo Kivengere (1919–1988) was a Ugandan Anglican leader sometimes referred to as “the Billy Graham of Africa”. He played a huge role in a Christian Revival in Southwestern Uganda, but had to flee in 1973 to neighbouring Kenya in fear for his life after speaking out against Idi Amin‘s tyrannical behaviour.

Kivengere had been made Bishop of Kigezi and was among several bishops summoned to Amin’s quarters. Angry mobs called for their deaths. Eventually, all were permitted to leave but one, the Archbishop, Janani Luwum. The others waited for Luwum to join them but he never came out. The next day the government announced that Luwum had died in an automobile accident.

Urged to flee by friends who said, “One dead bishop is enough,” he and his wife that night drove as far as their vehicle could take them and with the help of local church people in the hills they walked until the next morning brought them to safety across the border in Rwanda.

He later authored the book I Love Idi Amin to emphasize the qualities of forgiveness for those who wronged you and love of those who persecute you. Kivengere stated, “On the cross, Jesus said, ‘Father, forgive them, because they know not what they do.’ As evil as Idi Amin is, how can I do less toward him?”

Bishop Festo was invited by Michael Cassidy to join African Enterprise in 1969 and to build up a team of AE evangelists in East Africa. He returned to Uganda after Amin’s downfall to continue an active ministry until his death by leukemia in 1988.

Kivengere was known as a great storyteller and often thrilled his own and other’s children with his storytelling skills. A favourite story of his: “One day a little girl sat watching her mother working in the kitchen. She asked her mummy, ‘What does God do all day long?’ For a while the mother was stumped, but then she said, “Darling, I’ll tell you what God does all day long. He spends his whole day mending broken things.”

Ebenezer: Thus Far the Lord has Helped Us 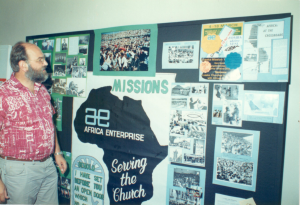 “Thus far has the Lord helped us”. The people of Israel had backslidden but under the leadership of Samuel, they decided to come back to the Lord in fasting and prayer. They threw away the foreign idols and recommitted themselves to the Lord. Their archenemy the Philistines miscalculated their move and attacked when the people were enjoying their retreat with the Lord, in the middle of a burnt offering. This was the wrong moment to attack because “the Lord thundered with loud thunder… and threw them into panic…” (10). And Samuel set a stone and called it “Ebenezer, saying ‘thus far has the Lord helped us’”.

When the Corona virus hit the world, analysts turned their eyes towards Africa and prophesied an unprecedented apocalypse for the continent. In an interview with CNN, American philanthropist Melinda Gates predicted that the virus would have its worst effect in developing countries with a special concern for the continent of Africa where she could already see bodies lying around on the streets.

We fasted, we interceded, all over the continent people prayed and are still praying. The Lord raised his banner against that enemy that was coming against us like a flood. Did the virus hit our countries? Yes, we lost people but not to the magnitude predicted by the prophets of doom. We, too, as a continent could set our Ebenezer and shout in praise and thanksgiving, “thus far the Lord has helped us.”

How about us in AE? As we look back over 60 years of ministry in our beloved continent of Africa with its corruption, its wars, its pandemics, droughts and famines, we could easily cry out “thus far has the Lord helped us”. We have carried out ministry in the most straining conditions, we have survived financial crises, scarcity of staff and resources, internal issues that at times rocked the ministry and threatened to divide us. But here we are, still standing together, strong, going from victory into victory in service to the Lord and his people.

This is our time to raise our voices together and shout, “Ebenezer.” “Thanks be to God, who always leads us in triumphal procession in Christ and through spreads everywhere the flagrance of the knowledge of him.” (2 Cor.2:14).

Reconciling the Past through Forgiveness 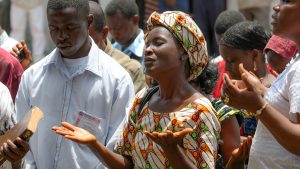 After 60 years of Ministry a Solemn Assembly would give time and space to reflect.

Before a Solemn Assembly concludes in praise and worship, there is much time spent on Reflection, Repentance, Forgiveness and Reconciliation

“It is so crucial to see our forgiving not simply as our own act, but as participation in God’s forgiving.

Our forgiving is provisional. God’s is final…

The only way we dare forgive is by making our forgiving transparent to God’s forgiving and always open to revision.

After all, our forgiveness is only possible as an echo of God’s” 2

Forgiveness is hard. You cannot pretend things are fine when you feel stabbed in the heart and trust is gone.

This prayer may take time to work through with God’s help and make take time for change and reconciliation to come.

Reconciliation: The Path to Forward Progress 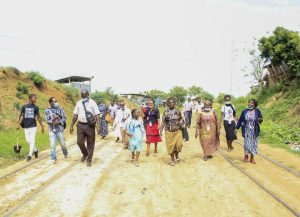 It is important that we, from time to time, find time to reflect on our past – much more when we have attained a milestone like the 60th Anniversary. As we introspect, we need to ask ourselves some hard questions. What did we do well? What did we not do well?

After a very honest reflection, we will find that there are many things that we have done well. We need to affirm those things and consolidate them as we march into the future.

However, we will find that there are things that we have not done very well – mistakes have been made; maybe relationships strained in one way or another. We will need to take a bold step to look into our past and make amends through reconciliation and forgiveness where relationships have been injured.

We should not allow our past success or failure to imprison us or hold us back. Reconciling with the past is the first step in pressing forward toward our high calling and goals. There is a lot that lies ahead that God has in store for us.

Therefore if thou bring thy gift to the altar, and there rememberest that thy brother hath ought against thee, Leave thy gift before the altar, and go thy way; first be reconciled to thy brother, and then come and offer thy gift. Agree with thine adversary quickly, whiles thou art in the way with him; lest at any time the adversary deliver thee to the judge, and the judge deliver thee to the officer, and thou be cast into prison. Verily, I say unto thee, Thou shalt by no means come out thence, till thou has paid the uttermost farthing.

But one thing I do, forgetting what lies behind and straining forward to what lies ahead. 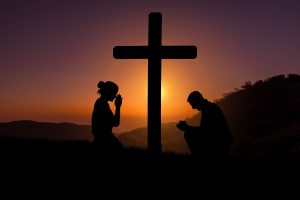 For sure we have stepped into the month of January in the New Year – 2022. For that gift or allocation of a new year we offer our thanks and praise to God the Almighty who has surely extended His “goodness and love” (Psalm 23 v 6) to all of us. This is the right time to reflect on our highlights and (also lowlights) in the past year and beyond. How can we reconcile the past through reflections?

The main purpose of a reconciliation by reflection is to restore a broken relationship. In Genesis 3, we see the first picture of the fall of our ancestors- Adam and Eve simply because of the sin of disobedience. On one hand, God reflected on this and gave them the deserving punishment /wages of sin, that is death. This is eternally sad news.

But the good news is that, through grace and mercy, God set up a continuous masterplan for the prodigal man/woman to be reconciled to the Loving Father. This reconciliation is based on forgiveness and not our record of sins. Reflecting on this, David says in Psalm 130: 3-4 (NIV): “If you O Lord kept a record of sins, O Lord who could stand? V4-But with you there is forgiveness…” God does not give up on His children who will choose the path of reconciliation.

May the message of Reflection and Reconciliation help us to clearly understand our identity and purpose in this life. In Christ we are a new creation. In 2 Corinthians 5: 17-18, Apostle Paul underlines our identity and ministry. Verse 17 says: “Therefore, if anyone is in Christ, he (plural) is a new creation; the old has gone, the new has come.” I sincerely pray that we may experience some spiritual “newness” in our lives in 2022.

In verse 18 we see our purpose; “All this is from God, who reconciled us to Himself through Christ and gave us the ministry of reconciliation.” Indeed, we are the reconciled team of brethren and we have the corporate privilege of reconciling the lost to the all-loving Saviour, Jesus Christ. As AE family, may we minister this message of reconciliation throughout the world in 2022 and beyond.

A Journey of Growth and Impact 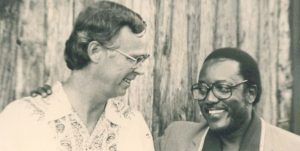 “Thank the Lord! Praise his name! Tell the nations what he has done. Let them know how mighty he is!” Isaiah 12:4

As we celebrate 60 years of AE ministry and look ahead to the next 60 years of ministry, we have much to thank God for and indeed our initial response must and should be a celebratory shout saying, ‘Ebenezer!  Praise God!  Thus far the Lord has brought us!’

Let each one of us pause and take time to look back at the journey of AE from the 1960s to date, reflect and understand where we have come from and pray that the Lord will enable us to see a clear path ahead of us. I am reminded here, of God’s word to his people through prophet Jeremiah “Stand at the crossroads and look; ask for the ancient paths, ask where the good way is and walk in it” Jeremiah 6:16. Let’s walk in the path the Lord has set for us.

As one reflects and looks back, maybe from first hand ministry experience, or reading books and reports on AE, or talking to people, clearly the milestones and accomplishments of AE are evident and many. Now, our reflection today is to bring us back to the throne of God where we lay these accomplishments (mentioning but a few, and encouraging each one of us to add on as you pray) at his feet, praising him and acknowledging him for he is the one who has done it all.

We praise God for the vision bearer, who run with the vision. Michael Cassidy in his book “African Harvest” speaks of himself as an ordinary man called by God to do something pretty extraordinary and quotes Isaiah in reference to where AE must put its trust, “all. . .will be nothing more than the chariots of Egypt unless our basic trust is in God and his enabling power” Isaiah 31:1

As we look to the future, we continue to claim Africa for Jesus and must constantly be reminded of the Lords words “The harvest is great but the laborers are few” Matthew 11:37. Let us therefore pray to the Lord of the harvest that AE will raise more laborers to bring in more harvest as we enter another season of ministry.