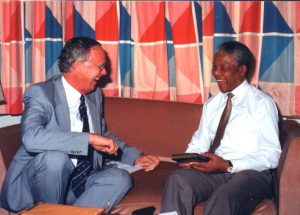 There were many challenges which Michael likewise faced in the few years running up to South Africa’s historic 1994 first democratic and non-racial elections. The threats facing the country were enormous, even after Mandela was released in early 1990 and the liberation movements unbanned by President FW de Klerk. In many ways the basic challenge was listening for guidance and then just fulfilling the next step as shown by the Lord in obedience. Even if the steps seemed modest in nature. But Michael and the AE team had to believe that whatever the Lord led them to do could have significant consequences.

Maybe the first step shown to the team was in the run up to AE’s thirtieth anniversary in 1992 of the first mission to Maritzburg in 1962. For the celebratory gathering leaders from all the teams in the rest of Africa were to be coming to South Africa. The South African team realised that these brothers and sisters had been through tremendous political convulsions in their own countries in the run-ups to political independence. They therefore would have much to share and teach. Thus it was that the notion came to Michael and the South African team to break these brothers and sisters up into several teamlets to visit the top leadership of each political party in South Africa and simply pray for each leader. Although this seemed a weak initiative, Michael felt obedience was very important. The venture was called From Africa with Love.

The story of these visits, which turned out in the end to be exceedingly significant, is catalogued in Michael’s book A Witness For Ever. The interesting realisation came to the team that many of these political leaders, from far left to far right, were dreaming similar dreams for the future of South Africa. So surely they should be sharing these dreams and visions in dialogue with each other. Face to face communication seemed to be an urgent necessity.

The challenge now for Michael was a practical one about how to get this to happen. Again guidance was sought, with the next challenge of discerning it. It’s interesting how God works, because Michael found himself in conversation with a Democratic Party Member of Parliament called Rupert Lorimer. Suddenly Rupert said: “I know a place called Kolobe. It’s an upmarket game lodge North of Pretoria with marvellous privacy and seclusion. Why don’t we take groups of these politicians from far left to far right away for a fun weekend of sharing their life stories? And simply discovering each other.”

This witnessed deeply to Michael and with his Personal Assistant, Peter Kerton-Johnston, they set about organising the first of these in early December 1992. The outcome was extraordinary. As each person shared their autobiographies, then their visions for the future of the country, then the steps to accomplishing that vision, scales fell off people’s eyes, enemies were humanised and demythologised, and stereotypes were blown up. To Michael’s astonishment, the chemistry of encounter produced results beyond all expectations as enemies suddenly became friends and willing co-belligerents in the struggle to see a new day of peace, reconciliation and justice come about in South Africa.

Through 1993, a further five such weekends took place with some 92 leading political figures not only from all the liberation movements but from the SA government itself going through this process. While participants did not leave Kolobe all in political agreement, they nevertheless left as friends who would seek to work together for the New Day.

The rollout from the Kolobe Lodge encounters forms a major theme in Michael’s book on the elections A Witness For Ever. In fact, the Kolobe friendships ended up playing a historic role in averting political catastrophe and enabling South Africa to come through to a new political dispensation. This always amazed Michael. It seemed to him that God in His totally mysterious ways had taken one of the weakest political initiatives and used it under His Hand in bringing forth what became known as the Miracle Election and the ushering in of what Desmond Tutu called “A Rainbow Nation”.

In retrospect Michael always felt that the key challenge he and others faced in the run up to the historic 1994 elections was that of simply listening to the Lord, seeking His specific guidance, and then following through in practical obedience. The Lord then did the rest.